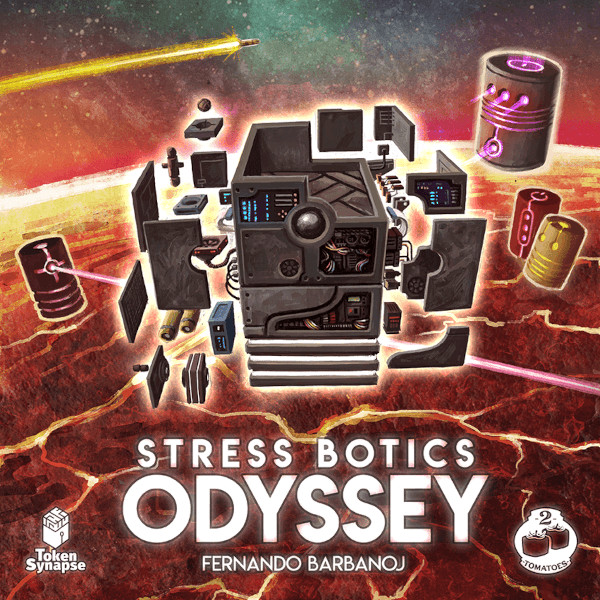 Stress Botics Odyssey expands the heavy eurogame experience in 5 axes, while maintaining the basic rules and rhythm of the base game.

The first enhanced axis is the main room (the room where Alpha Bot currently is). Odyssey’s alternate board contains a zoom of the main room, and thus players will have to take into account their positioning, in order to fight against the cylindroids and defend Alpha Bot from them. If Alpha Bot does not reach the surface, deliveries to ships will be much more complex to execute!

The second enhanced axis are the Cylindroids. When the players eliminate an entire wave of enemies, a Cylindroid Elite will appear. This powerful enemy is Alpha Bot’s nemesis, and boasts its own AI and complex behaviour.

The third enhanced axis is Alpha Bot. Beta Bots will be able to access the interior of Alpha Bot through a new type of action. Once inside they will be able to control Alpha Bot’s AI in order to speed up its behavior, change its direction to crush enemies or avoid obstacles, repair shields, collect resources or equip objects, among many other things. However, players will have to be cautious when interacting with AlphaBot… If it receives damage while being controlled, it will activate its other temperamental AI revealing one of its multiple aggressive behaviors, such as going back to an already explored main room or indiscriminately attacking any robot next to it!

The fourth enhanced axis is the Solo Mode. By adding Delta Bot, a small robot that will accompany us to fulfill our objectives, adventurous players can play the game on their own. Odyssey includes an additional board to be affixed to the player’s blueprint in order to expand management during the maintenance phases, as well taking care of Delta Bot. If the little companion accumulates too much stress it will explode, making the game much harder for the solo player.

The fifth enhanced axis is additional content. Odyssey adds more items to the current sets, including a new type of item: the boxed items. Those can be dynamically equipped from the main room to be used more immediately, adding a touch of improvisation both to combat and to the strategies that structure the game. In addition, Odyssey includes modular boards that expand the detail of several mechanics and include unique characteristics in each player count.